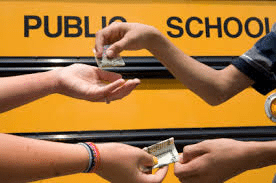 Teen drug use and abuse is escalating at an alarming rate. Teens are beginning to use drugs earlier, in larger amounts, become physically addicted and overdose younger than ever before. While for many years the use of marijuana and alcohol by adolescents was seemingly looked upon as simply experimentation or behaviors of growing up, much harder illicit drugs (or “street drugs”, whatever that means) are entering into the picture for younger and younger teens. Cocaine, crack, heroin, and prescription opiates like Percocet and OxyContin seem to be regular offerings on the buffet of teen drug use and abuse. If that isn’t concerning enough, new designer drugs and laboratory-made drugs such as methamphetamine (meth), Ecstasy or “Molly”, or new drugs with ridiculous names like Krokodil, bath salts and Meow Meow are being used regularly by children. These drugs, created in make-shift “laboratories” by amateur “cooks” hoping to be the next Walter White, are a mix of dangerous chemicals, often unpredictable in their effects on the user and can be difficult to treat or administer appropriate medication during initial acute states of abuse or overdose.

A 2013 national study conducted by The Partnership at Drugfree.org and MetLife Foundation found that teen use and abuse of prescription drugs was up 33 percent since 2008, with significant contribution to that rise being the use and abuse of stimulants such as Ritalin and Adderall (http://www.drugfree.org/newsroom/pats-2012). Other prescription drugs being used and abused by adolescents were opiates such as Percocet and OxyContin as well as benzodiazepines like Valium and Xanax. Other alarming facts about teen drug use and abuse include:

These facts are alarming. Teen drug use is at an all-time high (please pardon the pun.) Adolescent drug use is no longer confined to the outdated scenes of weed smoking Jeff Spicoli in Fast Times at Ridgemont High, the innocent 70’s hanging out in Dazed and Confused or the alcohol fueled good times in Superbad. The truth is closer to Requiem for a Dream or the consequences of the teen character Caroline Wakefield in 2000’s “Traffic”. Most parents were outraged at the portrayal of drug use and crime and sex in the 1995 movie “Kids”, but maybe director Larry Clark wasn’t too far from the truth. That movie could easily be based in 2014, except instead of a 40 oz., Telly would be high on Meow Meow. The drug names be stupid but the consequences of teen drug use are not.

There are many studies detailing the effects of drug and alcohol use on the adolescent brain. The teenage brain, demonstrated by neuroscience and MRI technology, is a brain that is still in development. The risks of drug and alcohol abuse on a brain still going through an important developmental stage are extremely high. More than any other group, adolescents are at risk for substance abuse and addiction and more than any other age group in the population teens risk both intellectual and emotional damage due to drug and alcohol abuse and the effects of those harmful chemicals.

And now the million dollar question: What can be done about it? Certainly parents need to not be scared to talk intelligently and insightfully with their teens about drugs and alcohol. Hiding or running from such conversations will only hurt, not help. Facts show that teens who have parents that talk to them regularly and openly about the dangers of drugs are 42 percent less likely to use drugs than those teens whose parents do not. The unfortunate part about that statistic is this follow-up: Only 25% of teens report having open and honest conversations about drugs and the dangers of teen drug use with their parents.

So then what would be the next step? Because of the extensive upward trend of teen drug abuse or addiction, there is a huge need for adolescent treatment of substance abuse and chemical dependency.  Adolescent substance abuse treatment must be handled separately and somewhat differently than typical drug and alcohol treatment would be for an adult. Age, physical differences, maturity, emotional issues and brain development are all reasons that teen substance abuse treatment must be tailored to their age group. More so than adults, adolescent drug treatment must also address educational and vocational issues. And although successful and sustainable drug treatment for any age is most likely to occur when a patient’s family is intimately involved in the treatment process, this must happen even more so in adolescent treatment if the teen is going to be successful in their journey of recovery.

Adolescent drug treatment is a unique form of substance abuse treatment and although the need for adolescent treatment is staggering, the available treatment programs and services are often few and far between. This is especially true in Maryland. To fill this need, Maryland Addiction Recovery Center created the “Recovery After 3” adolescent treatment program, a drug and alcohol treatment program catered to the needs of teens suffering from alcohol and drug problems. This program offers afterschool treatment in a true intensive outpatient (IOP) program, while allowing the teen to continue their education at school. MARC will work with the school administrators, counselors and teachers throughout treatment in a way to support both organizations in the best interest of the teen. This program also allows parents to not have to send their child away to a wilderness camp or a 6 to 12 month long program, while receiving the same level and quality of drug and alcohol treatment.

If you or someone you know is suffering from drug addiction, alcoholism, substance abuse or any other drug or alcohol issues, we can help. Please don’t hesitate to call Maryland Addiction Recovery Center at (410) 773-0500 or email us at Contact us today. Visit www.marylandaddictionrecovery.com for more information on our treatment services, including the “Recovery After 3” adolescent treatment IOP program.