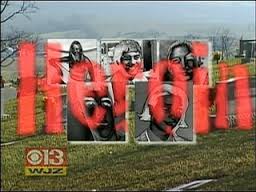 For year’s Baltimore City was known as the “heroin capital of America” and while that title may or may not still fit, it is naïve to believe that the heroin epidemic sweeping the country (an epidemic that, by the way, is not new and have been occurring for many years now) is contained only within the limits of Baltimore and to city residents.

What has Been Done to Combat Heroin Addiction in Baltimore

For the last 20 years the over prescribing of prescription narcotics like Percocet and OxyContin has skyrocketed and based on the criminal apprehension and prosecution of doctors and “pill mills”, heroin has become a cheaper and more dangerous alternative for many people. This is not a problem confined to cities. Baltimore has become more a distribution center for residents of Baltimore County, Harford County, Carroll County and Howard County that are looking to acquire heroin. A drug addiction that began with a prescription pad and a doctor has morphed into the use of illegal street narcotics and syringes. Recent articles have stated that “1 in 10 Baltimore residents are addicted to heroin.” That fact may or may not be accurate, but a more alarming study would be how many Baltimore County heroin addicts are there or how many young adults in Harford County are addicted to heroin.

The opiate epidemic is one that encompasses all of Maryland. Overdose deaths, especially deaths of teens and young adults, are on the rise. This is occurring from Baltimore City to Westminster, from Catonsville to Pikesville, and from Bel Air to the Eastern Shore and Ocean City. The homeless are affected as well as the residents of million dollar homes in Severna Park, Ellicott City, Bethesda and Towson. White and black, male and female, gay and straight.

New legislation like The Good Samaritan bill and the state’s Overdose Response Program allowing the use of the naloxone, a prescription medication that reverses the effects of a heroin overdose are great starting points for the state of Maryland to combat the heroin issue. However, more action needs to take place and more resources need to be made available. Addiction treatment in Baltimore must become more regularly available. Furthermore, quality substance abuse treatment must be supported. Maryland, forever on a 1980’s kick of opiate replacement therapy and long term medication maintenance programs, needs to wake up like many other places throughout the country and understand that sticking a 21 year old heroin addict on long term methadone or Suboxone maintenance is not an answer, nor is it even drug treatment.

Drug treatment in Maryland needs to offer heroin addicts freedom from active addiction and the ability to live a high quality of live drug free. Additional resources like sober houses in Baltimore and sober living environments throughout Maryland need to be increased. Safe, structured sober living is a necessary step in the continuum of care for some entering recovery from an addiction in Baltimore. However, the lack of good quality sober living is astonishing in a state plagued with an addiction epidemic. There are several good halfway houses and sober living homes, but many more need to be opened and supported by the community throughout Maryland.