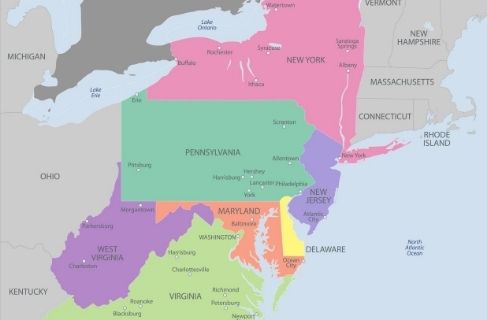 Addiction Trends in the Mid-Atlantic

The Mid-Atlantic area of the United States is an area on the Eastern seaboard tucked away in between the Southeast region of the country and New England. It is made up of seven states: Maryland, Delaware, Pennsylvania, New York, New Jersey, Virginia, and West Virginia. It also includes the major city of Washington, D.C. This is an area that has been ravaged by addiction, especially hit hard several years ago by America’s ongoing opioid epidemic. Previously, due to major population density in major cities such as New York City, Philadelphia, Baltimore, and Washington, D.C., it was a hotbed for other American drug crises such as the 1980’s crack epidemic.

As America takes steps to combat the opioid crisis and continues to address addiction as a chronic illness and a public health crisis, the cities and states within the Mid-Atlantic area of the United States continue to deal with issues surrounding addiction, alcoholism, substance use disorder, rising overdoses and overdose deaths, and public health issues arising from drugs and alcohol.

Let’s take a look at some of the more recent statistics involving addiction, the opioid crisis, overdose deaths, and the public health impact of substance use disorder in the states that make up the Mid-Atlantic region of the United States.

The number of unintentional drug and alcohol-related intoxication death has risen steadily in Maryland from 2007 to 2018. In 2007 there were 815 related fatalities, compared to 2406 in 2018. The majority of these fatal deaths were due to opioids. Although the numbers are not verified as of yet, according to preliminary date from the Vital Statistics Administration (VSA) of the Maryland Department of Health (MDH), there were increases in unintentional intoxication fatalities related to nearly all major drug categories in Maryland in the first calendar quarter of 2020. The numbers show an increase from the first three months in 2019, with the majority of all fatalities being linked to opioids, and Fentanyl was involved in 83.5% of all cases.

Based on the last reported numbers in the state of Virginia, there seems to be a positive, if only slight, trend in drug-related issues. While Virginia still reports drug addiction increasing throughout the state, and contributing to multiple adverse public health effects, both Emergency Room or Emergency Department visits due to opioid overdoses were down in 2019. In 2018, Virginia saw 7321 emergency department visits and 1059 deaths, while in 2019 those numbers were reported to be (on the date of 10/18/2019) down t o 5832 emergency department visits and 650 deaths. There was also a decrease in overdose related deaths due to prescription opioids, while drug-related fatalities due to heroin or fentanyl remained stable.

In the state of Pennsylvania, 65% of drug overdose deaths in 2018 involved opioids. The total of fatalities in that year was 2866. In 2018, according to the latest statistics available, Pennsylvania medical providers were just under the national average of opioid prescriptions, writing 49.9 opioid prescriptions for every 100 persons compared to the national average of 51.4 prescriptions for every 100 persons. Throughout Pennsylvania between January 1, 2018 and July 18, 2020, 40,755 doses of naloxone had been administered by EMS, there were 26,335 emergency room visits throughout the state due for opioid overdoses, and there were an estimated 287,000+ individuals through Pennsylvania that suffered from a drug use disorder (this last number does not include individuals that meet criteria for having an alcohol use disorder.)

Most data for New York is split between New York City (due to high population density) and the state of New York. In 2018, New York medical providers wrote 34 opioid prescriptions for every 100 persons, which was one of the lowest rates in the United States, with the national rate being 51.4 prescriptions per every 100 persons. Based on the New York State Office of Alcoholism and Substance Abuse Services estimates, approximately 12 percent of New York State residents 12 years of age or older experience a substance use disorder annually. OASAS estimates that over 1.9 million New Yorkers have a substance use disorder.

In the state of New Jersey, the numbers in certain areas of substance abuse are climbing. Binge drinking is up across the board in every ethnic category, with 20.2% of whites, 13% of blacks, 23.5% of Hispanics, and 14.4% of Asian residents in the state dealing with binge drinking issues. New Jersey is also seeing a rise in drug-induced death rates, steadily trending upwards since 2009. Nearly 90% of drug overdose deaths in New Jersey in 2018 involved opioids. The total number in that year of drug related deaths was 2900. However, in 2018, New Jersey reported its lowest rate of opioid prescriptions since the data became available in 2006, with medical providers writing 38.9 opioid prescriptions for every 100 persons. This is much lower than the national average of 51.4 prescriptions for every 100 persons.

In the state of Delaware, there were 401 reported drug overdose deaths in 2018. Of that total, 88% involved opioids. Unlike other states throughout the Mid-Atlantic area, Delaware had a larger number of opioid prescriptions written in 2018 by comparison. For that year, Delaware medical providers wrote 60.6 opioid prescriptions for every 100 persons, above that national rate of 51.4 prescriptions per 100 persons. In 2019, Delaware ranked 42 out of the 50 states in drug deaths by state, with 29.2 number of drug deaths per 100,000 population.